The Camino Francés is not the only route to Santiago! It's easy to forget that because when we speak of "The Camino," it is almost always the Francés that we mean. And the Francés is almost inevitably every peregrino's first walk.

On the map below we have sketched in most of the routes on the Iberian Peninsula and those leading into Spain from France. The table below contains links to brief descriptions of the routes. 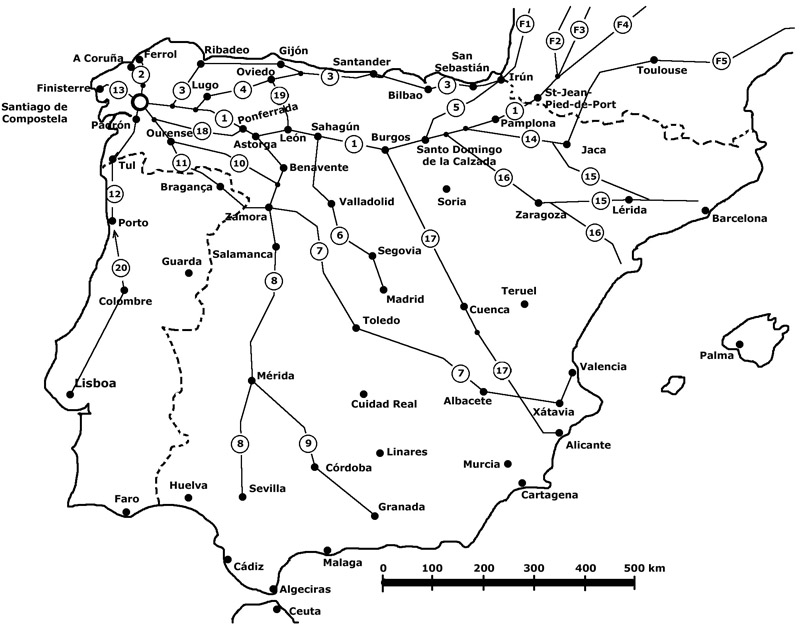 Some general remarks about the "other" Caminos are in order. If you are already familiar with the Camino Francés either through having walked on it or through your research in advance of walking then you should be aware of those facets that make the Francés different. The Francés has an extremely well-developed infrastructure of albergues, bars, restaurants, water fountains and even waymarking when compared to most of the other routes. You can get by on the Francés with your high school Spanish; this will not serve you very well on the more obscure routes. Even arranging a roof over your head at night or locating where to find food may require conversations with the local populace. On the Francés you are rarely out of sight of other pilgrims; on some of the other routes you may be alone much of the time. On the Francés a stretch of 10 km without water or services is unusual; on some of the other routes, 30 km intervals may be the norm. For cyclists, a touring bike will serve on the Francés while a mountain bike is required on many of the others. None of these observations are intended to discourage branching out, but they are intended to encourage thorough knowledge of what is involved.

Always a great source for trains of all kins, certainly the Caminos included, is WikiLoc. Use the search facility to home in on your desired route. And another useful site is GPS Visualizer. Of special interest in this site are the facilities for converting files among Google Maps, KLM, GPX and other mapping formats.

Follow this link to the Wikipedia entry "Camino de Santiago," which has brief descriptions of numerous routes with the usual links to places and features. And, although not maintained and not updated for a considerable period of time, Peter Robbins once listed more than 100 routes on his website.

Routes in Spain and Portugal