The phenomenon of pilgrimage, and in particular, the Santiago pilgrimage, has been studied for centuries.

Here in Camino Essays, American Pilgrims offers a fascinating collection of essays on various topics related to the Camino. Short versions of many of these essays have been previewed in the American Pilgrims newsletter, "La Concha."

Be sure to check back to this page for new material.

A link to a website from American Pilgrims on the Camino is not an endorsement,  authorization, sponsorship or affiliation with respect to the site, its owners, its providers, or the content of such site.

First-Time Hospitalera: A Different Kind of Camino: A view of the Camino from the other side of the registration desk. Thoughts by a first-time hospitalera. (12/24/16)

Lessons from Other Pilgrims: Pilgrims found and lost, gratitude and connections. (6/25/16)

The Camino and Manuscripts: Walking the Camino through Medieval manuscripts. (12/31/15)

Camino as Transition: Let me start by being honest; I never planned on being a peregrino. (9/22/15)

O Cebreiro: How the Boston Marathon Bombing and the Camino de Santiago Changed My Life. (5/8/15)

Amigo on the Camino: The arid plateaus of the meseta dominate the central portion of the Camino Francés between Burgos and León. Some pilgrims pray for an escape from the meseta, but for those who are drawn to the quiet expanse of wheat fields bordering the Roman Road, pleasant surprises await. (2/16/15)

What to expect on the Camino: There are of course the sights. But also the sounds, smells, tastes and sensations. Mountain ranges, rivers, fertile fields of wheat and corn and vineyards. Oak, beech, pine, and eucalyptus trees. The bleating of sheep on a hillside. Being wet, dry, sweaty or shivering. Tortillas de patata, ensalada mixta, bocadillos de jamón, café con leche, vino tinto and cerveza. (2/16/15)

Who runs the albergues?: Ever wonder who runs the albergues and sets the house rules and practices? Be it a religious order, a Camino association, a municipality or province or a family you'll find it interesting as to how they differ while all serving the same basic purpose—care of pilgrims.(12/8/14)

The Song of El Cid: Eleventh Century Spain was fragmented into kingdoms and other domains on both the Christian and Muslim sides. These realms were continually at war among themselves. El Cid was a soldier-adventurer of this time whose legend endured through the centuries and became a symbol of the Christian Reconquest. This is his story as told by himself in the guise of a medieval troubadour – but with some present-day anachronisms creeping in. (6/20/14)

Ultreya: "A man sleeping in the cot next to mine was snoring." Beginning with this inauspicious first night on the Camino a young woman finds the meaning of "¡Ultreya!" (5/29/12)

Pilgrims' Progress: Medieval pilgrims hiked the Camino de Santiago hoping for a miracle. Modern-day ones do it for the physical and spiritual challenge. Oh, and for the bragging rights too. (1/20/12)

Ode to a Bedbug: With apologies to Robert Louis Stevenson and just about everybody else as well. (8/31/10)

Pilgriming and Post-modernism: Connecting with the Camino Within: What place does pilgrimage have in 21st century society? (5/1/10)

A Tale of Two Pilgrims: She was from The Netherlands. He was from California. Their paths, their Caminos crossed in Estella. (11/17/09) 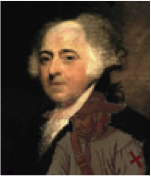 John Adams and the Camino de Santiago: Those of you who have read any comprehensive biography of John Adams will perhaps remember that, sailing to Paris in December 1779, the leaking ship carrying Adams and his party was forced to put in at Ferrol in Galicia from where they eventually made their way by land to Paris. And for those who knew this and then wondered if Adams knew of the pilgrimage to Santiago or wondered what he might have written about this journey, you few will be most interested to know that indeed he did know well of the Camino and that he "…always regretted that We could not find time to make a Pilgrimage to Saint Iago de Compostella." (11/10/09)

An Introduction: An introduction to the collection of essays and how they came to be.

Language on the Camino: Inspired by the experience of being a tourist in a foreign country for which the traveler had few language skills, this is a reflection on the issue of the Medieval pilgrim traveling into a linguistically foreign land.

Three Classic Guidebooks: The Codex Calixtinus, the 12th century "guidebook" for the pilgrimage to Santiago, is widely recognized as being the world's first travel guidebook. In this essay, the author considers three classic guidebooks written during the first three decades of the 20th century.

Sheep on the Camino: Sheep? Yes. From Roman times into the 19th century, the economies on the Iberian Peninsula had at their center sheep or, more correctly, the wool they produced. This is an examination of the phenomenon and should serve as incentive for the contemporary pilgrim to be attuned to the sheep culture that he or she will encounter along the Road.

The Canal de Castilla: As the contemporary pilgrim is struggling, physically or psychologically, across the Meseta west of Burgos, suddenly just past Boadilla del Camino a mirage of placid water appears beside the Road. This is the history of that mirage, the Canal de Castilla.

Food and the Medieval Pilgrim: El menú del peregrino, bocadillos, merluza, pulpo, calamari,the mid-morning café con leche. These are the trials and joys of the contemporary pilgrim. What was food on the Road like for the medieval peregrino?

The Tarta de Santiago: Not an essay but a recipe for the delicious dessert that appears on every menú del peregrino in Galicia.

A Christmas Feast on the Camino: While not specifically about Christmas on the Camino, a chilling thought for most of us, this essay considers Christmas celebration in the medieval world.

Recipes for a Medieval Feast on the Camino: If walking the Camino hasn't been enough, here is a complete menu to reproduce a medieval feast.

Music Associated with Santiago and Pilgrimage I: From its beginnings in the mists of history some 1,200 years ago, the pilgrimage to Santiago has been the inspiration for music. This is an examination of the phenomenon focusing on the period before 1500.